Hera the Goddess of Marriage and Birth 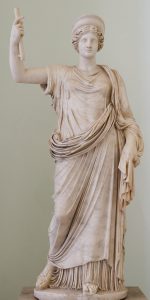 Hera or Juno (Roman) is the Goddess of Marriage and Birth, the Queen of Heaven and Olympians. Hera was married to Zeus, the King of God and her brother. Before her marriage, she had dominance over the earth, heaven, and all aspect of existence including seasons and weather. Just like other gods, Hera had super strength including, immortality, resistance to injury, and her unique ability to curse or bless the marriage. As the goddess of marriage and birth, she symbolized women’s responsibility as wives, who need to take care of others.

In most myths, Hera is depicted wearing the diadem,  jeweled in the shape of a half-crown, and holding a pomegranate as a symbol for birth, blood, and death, in her hand. She was known to have the peacock as a symbol, depicting her beauty, luxury, and immortality, and the cow embodies Hera’s watchfulness of human beings, as her sacred animals. Hera has a strong preference for lilies over other flowers. Lilies also symbolized humanity and devotion, and it is the 30th wedding anniversary flowers.

Hera was the youngest daughter of  Cronus and Rhea. After their marriage, Zeus and Hera went on a 300 years honeymoon where they had three kids together, Ares the God of War, Hebe the cupbearer of the Olympians, and Eileithyia the Goddess of Childbirth. In some myths, Hephaestus was known to be the son of Zeus and Hera. In other myths, it was believed that Hephaestus was created by Hera alone after her anger of Zeus unfaithful action in their marriage. Hera is deeming to prove that she does not need Zeus, by having Hephaestus alone. However, Hephaestus was born with birth defect, which greatly upset Hera as well as Zeus.

Even though, Hera was the Goddess of Marriage, her marriage, was unsuccessful. Hera was famous for the jealous and vindictive response to her husband’s mistresses and illegitimate children, and her revenge to their mothers and any gods or goddesses who claim to be more superior than she is. Hera had an unstoppable hatred for one of Zeus’ favorite sons, Heracles. To execute him, Hera summoned the storm over the sea to get him out. That incident had inflamed Zeus’ anger towards Hera. Hera was hung in the clouds with the golden chain, and anvils attached to her ankles by Zeus as her punishment. Hephaestus, who tried to help his mother, was thrown from heaven by Zeus, however, in other myths, it was believed that he got thrown away because of his birth defect.

Hera was also known to be the creator of the Milky Way. The legend stated that Zeus brought his son who was born from a mortal woman, Heracles to suckle Hera’s milk while she was sleeping, in the hope of endowing godlike qualities. Once regaining her consciousness, Hera pushed them away allowing her spurt of milk to drop which resulted in the creation of the Milky Way.

There are many temples dedicated to her in various Greek City-states, women often keep the altars of her in their homes. Greek women, who wish to conceive sons, they often offered a vow:  small statues or painting, or apples, any fruit representing birth. According to researchers, one of the earliest Hera’s Temple was made before any of Zeus’ temples.This shows that Hera was worship by the Greek long before Zeus. In addition, entering marriage is considering as their rite of passage, and it is the only way for women to change their social status.

Despite her vengeful tolerance towards her husband’s mistress and illegitimate children, Hera was faithfully worshipped by the Greece and Roman. The month June was named as an honored for Hera from her goddess named in Roma, Juno. June is the most popular month for weddings.

Campbell, Mike. “Meaning, Origin and History of the Name Juno.” Behind the Name, www.behindthename.com/name/juno.