On the busy street of London, among the lost crowd in front of the world most influential news platform, there I was, sniffling through the cold air of spring, minutes away from my first live TV interview with BBC. I was sat in between the interviewer and the founder of the Liger Leadership Academy, Trevor Gile. The automated camera started rolling as soon as the last advertisement show stopped. Under the brightest spotlight, I focused my mind on answering the questions, while mentally recalling the training I got the day before. ABC: acknowledge, bridge, and control the conversation. Bam, bam, and bam answers after answers, I finished the five minutes interview where I discuss my transforming experiences attending the Liger Leadership Academy, along with my passion for psychology and plan for the future, with the biggest smile on my face. It was done. We celebrated. I received compliments. That was it — that was what I thought at the moment.

After the video went up on social media pages, it received likes after likes, comments after comments, and shares after shares, and that was when it really hit me. This meant so much more. My family and friends saw it, anyone with access to Facebook and own a smartphone could have seen it. People watched it! They heard my message. They know my story!

It was the shortest five minutes, yet, most impactful time of my life. I was the inspiration.

I grew up in a family of five: my mother, father, and two younger sisters. Education is highly valued in my family, but, unfortunately, only the boys are the priority. Among the many female relatives that I know of, pursuing higher education was never their prime concern; they were all expected to get married and have kids. Naturally, a similar expectation was set upon me and my siblings: finish high school, find some job, then get married. In a small conservative village of Cambodia, my two sisters quickly learned the negative stereotypes of what they can and can’t do because of their gender.

The interview was an opportunity that allows me to show the parents of my capability as a woman. I’ve shown them that I am so much more than the brown color of skin, my high pitched-female voice, the flowy dress that I wore, the puffy black hair that I have, and the feminine body that I own since birth. I am able to show my sisters that their gender does not limit what they are capable of. I am able to show that as a human we all possess the ability to make a difference, and all it takes is opportunity and courage.

Anybody could have done the live interview, but I was lucky to be award with this tremendous chance: a chance to share my story. And I was also, the voice of Cambodia.

Many people learn about my country only of the tragedy and genocide that happened years ago. However, Cambodia is not the death that is caused by landmines, it is not the bloody genocide of 1968, it is absolutely not the nation of poor and traumatized people. Cambodia will be known for the young generation sending satellite to space, the cultural business that is run by 16-year-olds, artificial reefs that were implemented into the ocean by a group of 15-year-olds marine conservationists, the first ever LGBTQ submit in the entire country that was led by a passionate young Cambodian girl, and Cambodia will be known for its success stories. This is who we are. This is what I’ve shown to the world. We are the Cambodians that is going to change this planet.

Watch your back world, we are coming at you!

I used to see change as the direct actions, that is time-consuming, and requires a lot of dedication from many people. However, I have come to realize that change does not need to be direct, time-consuming, or needs a lot of human energy to make it happen. Change could be subtle, yet, impactful. A five minutes video could be equivalent to five years of impact that has the potential to change many lives. Anyone could have done it, and all it takes is an opportunity. 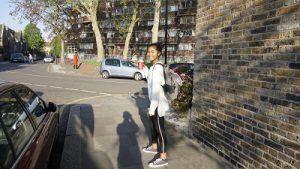