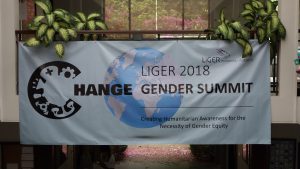 For the first ten years of my life, I lived in a confined community and was less exposed to the world-views. I know many women who gave up their education for marriage or so that their brothers could continue. But I thought, why must women have to make the sacrifice for men? I heard of many jokes about my male friend who seems “FEMINIST” — they sound insulting in my ears, but I never understand why people said them. I felt that it was wrong, but I never have the courage to speak up. Because of that, I thought that I might just be different. I was taught to not question the elders, I was held back because I felt that I was too young to have a voice. I grew up understanding that I should not voice my opinion.

Earlier this school year, I have stepped out of my comfort zone to permit myself a voice by giving a Ted Talk on Cultural Acceptance and Sharing. “Home is where the heart is” was the principle quote of my speech. I was inspired by the many refugees including Cambodian, who have left their home to other countries seeking help. Not only that those people are physically vulnerable, but they also are mentally and emotionally sensitive. Throughout the entire Ted Talk, I emphasize the bond of cultures that gives people purposes and hopes, and that is a bond that holds the communities together. I have investigated the Rohingya refugees, who are being forced to deny their culture, breaking their bonds, and is facing an enormous crisis. I finally spoke up for what I felt was right.

I have to admit, speaking in the Ted Talk and continue to be aware of the world’s issues just isn’t enough. I know that every moment that I breathe, and continue to live this comfortable life there are women who suffered silently from domestic violence and being the victim of rape and sexual harassment. Sometimes, it is just a problem where girls are told to learn to do house chores while guys do not have to do them. The kind of inequality rooted in many young people’s mind. I used to be in that same situation. Do I have to do this if I were a boy? I wish I were a boy. This thought continues to circulate in me. However, being a part of the Gender Equity Exploration has completely shifted my thought. In class, we’ve discussed a variety of gender stereotypes: why are women being seen as weak compared to men, and since when is women were ASSIGNED to the house chores and being a caretaker. I’ve learned that there are people who would listen to my story, and I have the capability to share mine. The conversations were emotional and uncomfortable, but that was what really gave me ideas to speak out and wanting other people to do the same. Not only that we’ve discussed these critical problems, but we also started a comfortable environment that allows people to discuss the same issues and share their stories through an event called Gender Summit. The Gender Summit itself was not a tangible solution, but the end of the day people have comes to many realizations in the gender perspective. Sometimes change comes with a conversation, dialogue, and questions.

Having my voice heard is what I ever wish for. Sharing my story, and allowing myself to hear others, but most importantly inspiring others to do the same was the greatest accomplishment in this school year. I might not start with the strongest voice, but I have made the first move. Therefore, I am encouraging YOU to do the same. “It’s not about finding your voice, it’s about giving yourself permission to use your voice” – Kris Carr.