I was selected to be one of the speakers for  TEDxISPP 2017. This year,  I have talked about the issues of Maintaining Cultural Diversity in a Globalized World,  specifically focusing the minority and refugees, around the theme of “Creating a Hopefull Future”. I was inspired by some Cambodian refugees who had returned back to their homeland after the war, some of which specifically kids, had very little understanding of their Cambodian’s culture. Therefore, I strongly feel that this is a topic that requires discussion and needed to talk about. 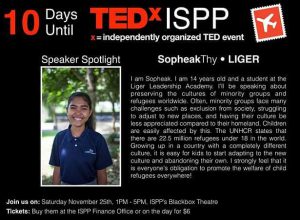 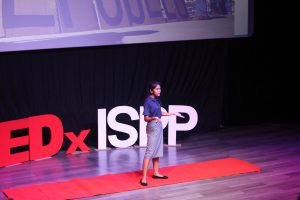 There is a quote that states: “Home is where the heart is,” and I firmly believe this. To me, home is where I can freely and comfortably express myself. By that I mean, it is where I can express my childish self. Even though I am 15 years old, I am also a one-year-old, a ten-year-old, three-year-old, a nine-year-old, and so on. I want to be able to tell stupid jokes that sometimes do not make any sense, and talk all day about my obsessions with Harry Potter, Doraemon, Pikachu, and pick-up lines, but most importantly, home is where there is support and love for me. That’s what home means to me. Everyone defines the word home differently. So, while you are listening to my talk, I want you all to think about: “What does home mean to you as a person?” and “How would you feel if you lost it?”

We live in a complex world with diverse people, cultures, traditions, religions and languages. Every individual somehow contributes to the changes in a society. Therefore, we should acknowledge and celebrate our variations in culture and identity. I grew up in a rural part of Cambodia with limited access to divergent world views. About five years ago, only a small percentage of the villagers had access to any modern technologies, and the idea of travel wasn’t that popular. It is a small village, so we interacted with the same group of people all the time. There wasn’t much cultural exchange happening between us, because we had so much in common already. Yet now, it is changing drastically. Today, almost everyone has smartphones and access to the internet, and are therefore more aware of the changes in their society and the world. Despite having access to modern technology and being more connected to different places, their understanding of human differences is still limited. Despite the limitations of my community, throughout my childhood, I was taught by my parents and relatives about Cambodian cultures and customs, the religion of the people, and about the minorities in my country. As I grew older, I was exposed to various people from many different backgrounds, from whom I could learn.

About two years ago, I went to Mondulkiri, a province located in the northeast of Cambodia for a school project called Hidden Voices. We traveled to different provinces to discover old Cambodian songs, those who could still sing them, and their personal stories. As the final product, we recorded a podcast, narrating the background of different singers and songs that we discovered. We interviewed many elders and visited one of Cambodia’s minority groups, the Phnong community.

The Phnong have lived in Mondulkiri for about 2000 years. They used to live in houses made out of bamboo, natural materials and thatch. They have their own language with the Khmer alphabet, as well as different beliefs, music, and culture. When we were there, they hosted a welcoming and good luck ceremony for us as visitors to their village with music and wine, which our teacher had to drink as a representative for all of us, as a part of their tradition. It was a really warm welcome from them. As the majority in this country, we, Khmer people, have played a huge part in influencing their lifestyle. It wasn’t my first time visiting a Phnong village, so I could see the tremendous changes in their society because of our influence over time. I noticed that more people could speak Khmer, when before, only a few Phnong men could speak Khmer. Nowadays, when Phnong children are born, they start to learn both languages: Khmer and Phnong. Furthermore, less people know how to play the traditional instruments and music, and their houses and clothing are more modern. I, along with my teammates, interviewed an old man, one of the elders in the village.

He stated, “I never used to worry about the extinction of our culture, but when I think about it over and over again, I notice that it is fading.” These people now live in concrete or wooden houses, sing our music, and speak and learn our language. The old man could still remember what their community had been like, and had seen the changes firsthand. What about the next generation? Will they be able to interact with their amazing culture? What about refugees who become a minority in another country? Slowly but surely they begin to lose parts of their culture and become more like the majority.  Imagine yourself in their shoes. How much would you have to go through to preserve your cultural differences, while striving to assimilate to the community that you live in?

I bet that most of you have heard of a country called Myanmar, formerly Burma. Myanmar is a country located in Southeast Asia, consisting of 100 ethnic groups; it borders India, Bangladesh, China, Laos and Thailand. This country is led by Nobel Peace Prize winner, Aung San Suu Kyi. Right now, as we all sit here in this luxurious and comfortable Black Box Theatre, Rohingya people, part of a Muslim minority group, are fleeing to join the more than six hundred thousand refugees who have left Myanmar for Bangladesh since August 25th. These people were forced to leave their homes because of persecution from other ethnic groups, specifically the Myanmar troops, many of whom are Buddhist. Many lives have been taken and families have been separated. In a situation like this, what do safety, home, and culture mean to them?

Where we love is the home — home that our feet may leave, but not our heart. We can think about culture this way: if a community is a computer, then culture is like the operating system; it’s what keeps people together and bonded. According to an article from ABC News that talked about the counselling work done with some Rohingya refugees, most of the refugees, including children, have been traumatised by the horrifying events they have experienced. The question now is: how will they, specifically children, live a normal life after being forced from their homes and everything they know.

A Bangladeshi psychologist stated: “They have seen in front of them — father and mother both slaughtered or burned.” There are literally thousands of heartbreakiong stories, but I want to share one that really stuck with me most. A pregnant woman in her mid-twenties tried to cross to Bangladesh just like the others. Sadly, before she made it to Bangladesh, she witnessed the death of her husband and relatives and the loss of her one-year-old child, and she just gave birth to her newborn. She walked for days, alone with her baby, to the safety of Bangladesh. As a mother. As a father. As a child. Seeing family members going through all of these tragic experiences. At that moment, getting away from being abused and finding safety is their only priority. To them, the words home and safety just mean seeking shelter and having enough food to eat daily. How about culture? Does it mean anything to them at all? What keeps them all together? There is no answer. Becoming a minority group in another country means facing many challenges such as exclusion from society, learning to adjust to a new place, and having one’s culture be somewhat less appreciated. Therefore, it is important to teach young about the variety of cultures in this world so that we can help to raise awareness and prevent discrimination toward minority groups, including refugees. It is our responsibility to help preserve different cultures and accept people without pressuring them to adapt to the majority norms. Yes, I understand that the world is changing, as well as the people in it. The world is developing new technologies and artificial intelligence and many other cool things that make our lives much easier.

At the same time, we are also faced with a blending of cultures, beliefs, and different ways of living. It is vital to remember where we come from, our home and our unique culture. We live in a world with around 7.6 billion other people; we must understand what keeps a community bonded and acknowledge our differences as well as our history. Appreciate what we have before it turns into what we had!